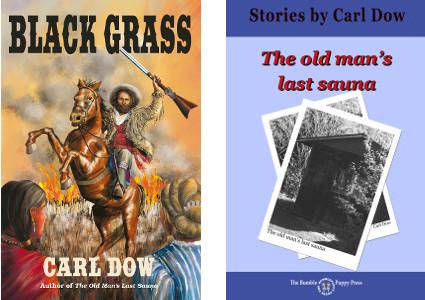 Buy a copy of Black Grass and add a first edition copy of The Old Man’s Last Sauna for only $10 more!

In 1866, as three civilizations collide on the high plains of North America, two women in love with the same man arrive at a strange accommodation . . .

Facing an invasion from the south, can Gabriel Dumont, War Chief of the White Horse Plains Métis, forge an alliance between the formidable Sioux, now on the warpath, and his small band of Métis hunters?

In an epic tale of love and lust, loyalty and betrayal, the outnumbered Métis must draw on their courage and experience as buffalo hunters to defend their homeland from the richly-funded American Party that is determined to expand the borders of the United States from the warm waters of the Bay of Mexico to the Arctic lair of the Wolf Wind.

Black Grass is available in print and ebook editions at most online retailers and, of course, directly from the publisher via this website! For a limited time, paper copies ordered through this site will be autographed by the author! Don’t delay – order yours today!

Explorations of the human spirit that will move, amuse and even shock

From odes to loves lost and loves found; from a clear-eyed look at what it takes to destroy a strong man to the web of love between a mother and her son; from the greed that drives a man to murder to a father’s understanding of the difference between his son’s imagination and the lies that lurk in the fears of his grandparents, Carl Dow’s stories introduce a powerful voice for the 21st century, one born of the turmoil, violence and struggle for justice and understanding that marked so much of the 20th.

There are no reviews yet.

Be the first to review “Two book special!” Cancel reply

The BumblePuppy Press is a small house with big ambitions. Or at least, a small press that aims to publish good work and to keep it available over the long term.

While Facebook says the New York Post story must be kept out of sight until verified, the standard for the Steele dossier was opposite. In that case, we were told “raw intelligence” should be published so that “Americans can make up their own minds." https://t.co/WwlSSjaeN1

Presumably, it doesn't matter if it's true - do I really have to add that it should? (Yes, yes I guess I do. It matters.)

Does it matter if the Hunter Biden emails are, you know, true? If they're not true - forgeries - why hasn't Hunter or the Biden campaign said so (which of course they would do). And if they are real, how is that not a legitimate story to report (even if their origins also are?). https://t.co/fjOm2jpgI8

any tips for my resume ?